The search for knobs and handles brought us to three different stores – Lowe’s, Home Depot, and Ace Hardware.

We immediately fell in love with these twisted knobs but later decided that they weren’t very practical and that going with ones that are more basic is the better way to go.

Our contractor suggested that we get handles for the drawers and knobs for the doors. He said that although more people are starting to use knobs on both doors and drawers, he thinks having both knobs and handles are better.
So we started at Home Depot and were disappointed at their selection. At first glance you would think they have all the styles in the world but many of the knobs and handles don’t match and/or they’re ridiculously expensive. $5 might seem cheap at first but when you have upwards of 50 doors and drawers, it adds up.
Our next stop was Lowe’s, which had a better selection. We selected a few possibilities but didn’t like how they looked when we brought them home and held them up to the cabinets.
We ended up at Ace Hardware which had the biggest selection that ranged in styles and price. We discovered that you get the best deal when you get the bulk sets so we ended up choosing the bulk set of knobs (we needed 35) and the matching handles. Below are the ones we chose: 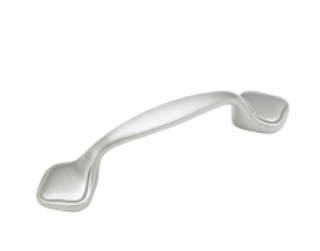 They are simple yet have a little bit of flare to them.