This past weekend, we had two important [temporary] additions to the house. The first, an old trusty dusty trash bin, and the second, someone who I could stuff into it, the Peanut! For those of you less familiar with the Peanut, she’s my sister and also goes by Suzanne.

What did we accomplish, you might ask? These past few weeks, I was working on cleaning up the loose bricks to redo the front row. But, after taking a closer look, we decided that we wanted to remove the front row of bricks altogether and use them to add another level to the mini-brick wall closer to the house. So, with the help of a hammer and chisel, I officially removed the small front brick walls and trimmed up the plants in front of our house that were getting a little cozy with the neighbor’s rooftop. My poor hand has seen better days; we noticed at dinner on Saturday that a my left index finger was nice and purple.
Along with the removal of the brick, the old wood shelving in the garage is now residing in the bottom of above-mentioned dumpster as well. The garage is looking a little messier until we get a new shelf and organize everything we have but, in the end, it will be much better than the previous setup. I still need to pull down the two mysterious doors in the rafters and the long piece of plywood that are just hanging about collecting dust spiders and who knows what else. 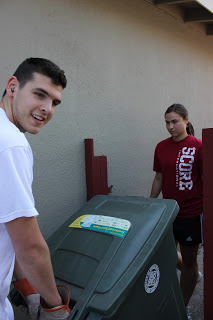 Suzanne gave several bushes a nice #2 cut before we ripped them out entirely in the backyard. Basically, all that is left after all of our hard work this past weekend is a Kansas wasteland with three rocks, two bushes, and a whole bunch of wannabe hedge plants. Oh and the tiny fruit tree.
Thanks again to Suzanne who came up and pitched in! Hopefully she had fun up with us as the first guest at our house. We know we did and can’t wait until her next visit!